Flammulated Owls (Otus flammeolus) are similar to screech owls but smaller, with shorter ear tufts, distinctive dark eyes, and a relatively longer and pointier wing shape. Their song is a low series of soft "poots" once every two to three seconds. They are found across western North America during the breeding season. Flammulated Owls primarily inhabit mid-elevation montane forests, in particular Ponderosa pine (Pinus ponderosa) and Jeffrey pine (Pinus jeffreyi) habitats and nest in tree cavities excavated by woodpeckers. They are small, nocturnal, neotropical migrants that vocalize quietly and are rarely seen. They migrate from wintering grounds in Mexico and Central America to breeding grounds in northern Mexico, the western United States, and southwestern Canada (McCallum 1994).

Historically, they have been missed in most nocturnal owl surveys because they do not arrive on their breeding grounds until late April to mid-May (Fylling et al 2010). Thus, relatively little is known about their distribution and abundance. They prefer forest types that are commercially valuable (most notably Ponderosa pine forests) which puts them at risk from logging. These diminutive owls are listed as a sensitive species throughout their U.S. range and as a species of special concern in Canada. They are also listed by the U.S. Fish and Wildlife Service as a Bird of Conservation Concern.

To obtain more information about their distribution and abundance, the Southern Sierra Research Station conducted road-based and off-road Flammulated Owl surveys in Sequoia National Forest, California in 2011. These surveys were part of a coordinated effort by the Partners in Flight Western Working Group to conduct Flammulated Owl surveys throughout their western range in order to use the information to develop a long-term monitoring strategy and to contribute to more detailed studies of Flammulated Owl demography (Fylling et al 2010). We detected Flammulated Owls throughout the survey area in the southern Sierra Nevada during the 2011 breeding season. Peak detections occurred in mid to late June and the majority of Flammulated Owl detections were in White Fir, Jeffrey Pine, mixed conifer, and Red Fir habitat. Owls were also detected in Aspen, mixed Oak woodland, riparian woodland, and Black Oak habitat (Stanek et al. 2011).

Natural cavities used by Flammulated owls are created by members of the woodpecker family, primarily in snags. These snags are not as common in thinned areas, as they are removed for safety or get knocked over by equipment. Thinning also removes the buffer these snags have against wind and weather and they fall over naturally. Squirrels and other avian cavity nesters compete for nest cavities, and as Flammulated Owls come late to the breeding grounds, these competitors may limit nest site availability. We aim to increase nesting options for owls which will potentially increase territory quality. Also putting up boxes, even if they don't always get used, may buffer negative impacts of logging, thinning, and fires. Successful introductions of nest boxes to managed stands would remove dependency on primary cavity nesters and lessen the potential impact of snag loss from logging projects.

Kerncrest Audubon Society and other private donors contributed to the building materials for Flammulated Owl Nest boxes, and volunteers helped build and hang the boxes. We did lose some of our nest boxes to the Cedar fire and we now have 61 nest boxes up in the mountains around the Kern River Valley (Breckenridge and the Greenhorns). We aim to check them once during the peak of the breeding season (last week of June/first week of July). Please contact Jenna Stanek (jestanek.ssrsATgmail.com) if you are interested in volunteering.

McCallum, D. A. 1994. Flammulated Owl (Otus flammeolus). In The Birds of North America, No. 93 (A. Poole and F. Gill, eds.). The Academy of Natural Sciences, Philadelphia, PA, and The American Ornithologists' Union, Washington, D. C. 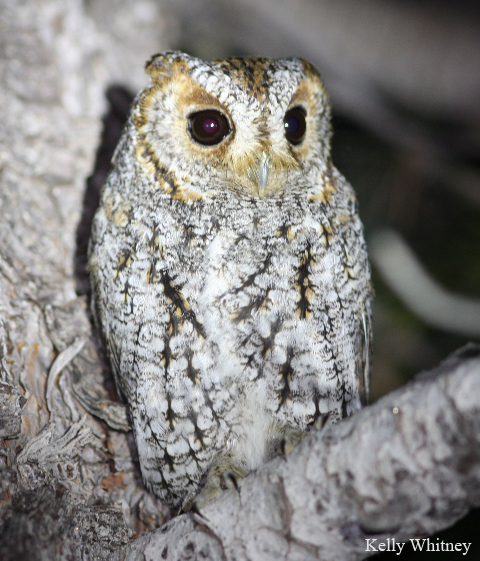 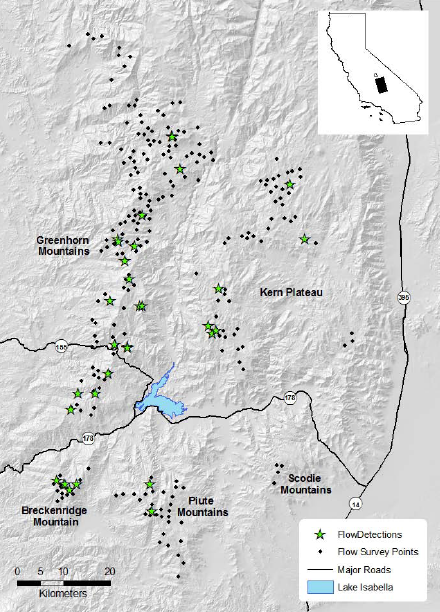 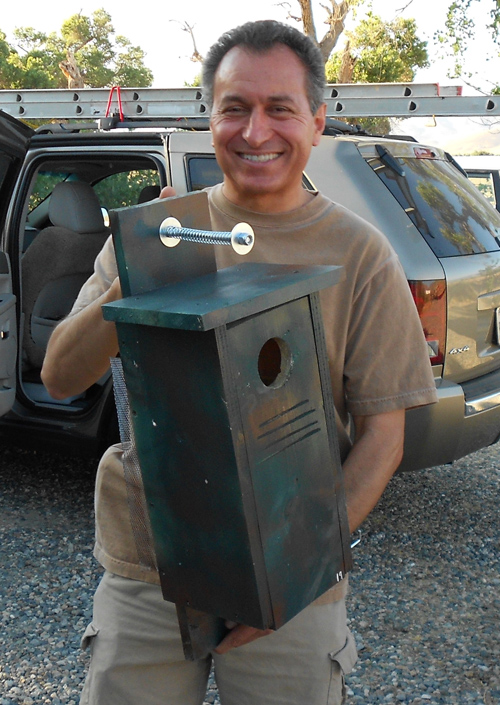 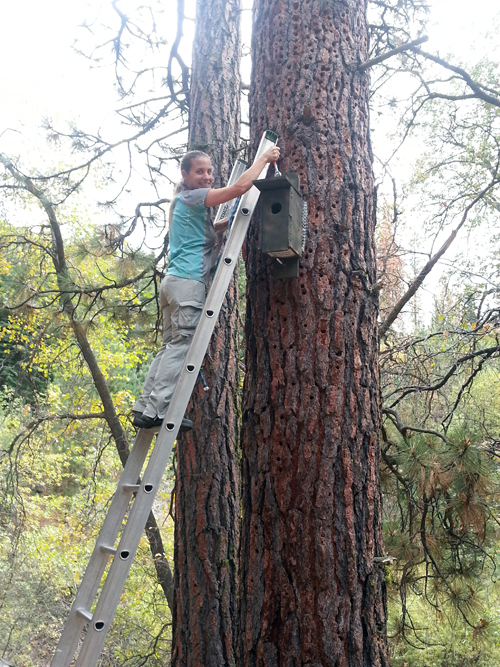